Hi my ign is Stocky32 and I’ve been playing mobas for years now. This is my first ever guide so bear with me if it’s not the best format etc. With Sev only being a few days new I noticed I had so many good cards from him and started tweaking and this deck has by far been the best I’ve used on him.  I’ve went many of games without even dying and have been able to 1 vs 3 without losing hardly any health. I know you need some pretty decent growth cards for him to really see how he shines in combat.

Sevarog is a very well round hero.  He has an escape, an initiator skill, A very good Ult utility skill for positioning and saving an ally’s butt.  I’ll go over a quick breakdown of his skills. 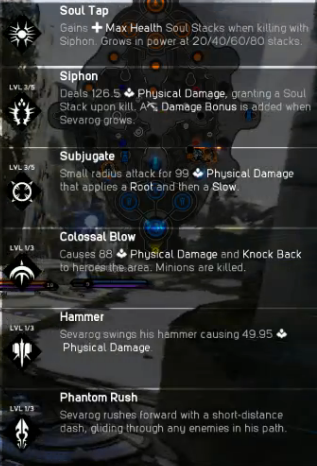 This is what makes you rival Grux in some ways…the trick is last hitting with your first skill Siphon.  The more stacks the more health you get as well.

This is your main skill. You only get stacks from last hitting with this skill. It takes some practice to get used to it but always wait until last hit to use it. even in a team fight.  Does pretty good damage as well

This has an incredible good range which surprised me and is your root skill.  It’s great for peeling for your adc’s or even when chasing down an enemy

It’s a short dash that goes through minions or enemies which is great for getting behind lines to the adc or even as an escape.

The Ken Griffey Jr Swing.  It takes a split second to really set up before you see the area effect to use but this can knock enemies off your adc or if your sneaky enough, knock them into your tower followed by a Subjugate for an easy kill.  Can always be used to divide enemies during team fights.

First of all, you want to start with a Health Pot and executioners key. That way while your clearing your jungle you can activate a harvester along the way fairly quickly and the stats really help out early game. But don’t bother upgrading the crit on it until you at least finished either the spiked or thorned armor for the damage boost. Remember to try and gank as you go through the jungle.

I build both armors and it depends on the enemy team how I upgrade them.  Sometimes I’ll drop straight Major Strikes in one if there aren’t many enemies with that type of damage.

Once you get your damage and your crit rate up and finish off your life steal and boost your crit damage. You will have around about these stats

Life steal per hit 50.  I wish I had some better drain cards but with the attack speed and damage you will stay mostly full health as long as you are hitting someone

Your critical strikes will be around 350-400 damage.  Which isn’t enough to melt people but it will be enough damage to make you a threat against an enemy.

Armor depends up to you how much you want or more damage.

You want to start off at the red buff camp.  The buff will help you clear the rest of the jungle at such a better rate. Ping and ask for help to clear the Red Camp and then proceed to the small white camp on the right. Turn around and hit the other small white camp going towards the middle lane and then you will have 3 points. Teleport home buy wind carver and repeat on the other side.

Feng or Grux late game will destroy you 1 v 1

Early game is weak until first 2 items are upgraded

You always want to max your Siphon Skill and your Subjugate. Phantom rush can be left at level 1 as it’s just a utility skill.

Hope this helps everyone with the new hero. I’m still trying out new builds and cards as I get them. If you have any questions, feel free to whisper me in game Stocky32