What is a Support:

A support is a champion who can keep another player alive, has a high form of cc, or zoning abilities, but on the otherhand doesn’t need experience as much because their leveling is poor.

You should support if you feel at home backing other up and keeping them alive (Medics). Also, if you lack the skill like i do to be the high damage dealer than supporting is a good idea.

Supports should go with their laners in the bot lane. This lane is generally gonna be the side with the black buff. This is to help the jungle get the CP and XP from the camp and your ADC the buff to push lane. On the other hand you shouldn’t start Orb Prime side because that will take your whole team to kill it and escort it to the other side.

Your laning partner should be someone that does sustained damage like auto-attacks. Ex. Sparrow, Grim.exe., Murdock, Twinblast.

There are essentially 3 types of supports.

On Average countering mainly goes through these 3 channels. Meaning that the champions themselves wont usually counter each other but what type of support they are will counter each other. In this way Sustainers beat Pokers, Pokers beat Guardians, and Guardians beat Sustainers on beverage.

During this time your responsibilities are really simple, ward jungle side of the lane (usually in the camo pool), Keep your laner alive, get the outside harvester (unlocks at 6 minutes in), and last hit when you can. This phase will end when 2 towers are destroyed. Warding for this part of the game should be in the area marked with a 1 on the map below. This area is where the enemy jungler will come from to gank you lane thus, warding it will give you time to react.

During this time period its the job of the support to be where the action is so to speak. This means if 3 people are pushing mid you go mid even if it means leaving your laning partner behind. Warding for this time should be in either spot 2 or 3 and in spot 4 on the map below. This is so you can see if they are in your jungle or at the orb prime. You only ward in spot 2 though if u have lost your first tower and need to fall back to your second one.

This is when you’ll see a lot of team fights start to happen. When this happens your sole objective is not to get kills but keep them from killing/ getting to your damage dealers. Warding in this phase should be only at spots 4 and 3 as they give you the most vision and still have eyes on the orb prime objective. 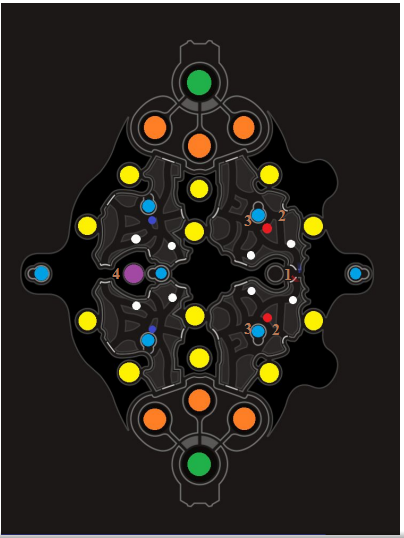 It is the job of the support and your laning partner to give a leash to where the jungler needs in the jungle, but “only if its on your side of the map” and not top side. If that is the case than the top laners will leash for him and you go straight to lane. Never go for the harvesters in the jungle unless the jungler asks because that is the junglers job and you need to stay in lane to help your laner.