Sparrow depends on her teammates for protection, while she devastates enemies with her attacks.

Sparrow benefits most from Power and Critical Strike Chance.

Early game, play safe and rely on allies to assist in securing kills. Use Piercing Shot if you need to harass enemies at range or you can drop Hail of Arrows to deal damage in an area. Sparrow has no escape abilities so positioning is key. Don’t push too far forward without backup.

Sparrow’s Ultimate, Inner Fire, allows her to hit multiple targets by splitting her arrows into 3. In teamfights stay behind your tanks and combo Invigorate and Inner fire to swiftly annihilate the enemy team.

Unlike the majority of Paragon Heroes Sparrow’s Basic attack is what influences her abilities since two more of them just modify or re-use her Bow Shot. They are Relentless and Inner Fire.

While holding, Sparrow charges a powerful arrow that deals Ability Damage to all enemies in a line, at a range of 2500 units. The arrow will travel through both enemies and the world. Maximum damage will be done if charged for at least 1 seconds.

Does hit through terrain. In this aspect it is like Murdock‘s Ultimate but shorter range. Has a range or ~ 2 ranged attacks and is very good for making a last deadly shot to a retreating enemy. However as any projectile it is not traveling instantaneously and in order to hit your target you have to be precise in predicting where it is going to be in the next half a second.

Piercing Shot can also be used to clean up Jungle camps quickly. You need to charge it and stand on the side of camp to make sure all the five minion’s health bars are highlighted.

Sparrow rains down arrows in an area, dealing Ability Damage over 4 seconds.

A good tool for clearing minion waves or jungle camps. Remember that it applies stacks of Relentless and therefore increases your Basic Attacks impact including Ultimate since it is just a modifier of your Bow Shot.

Another use of Hail of Arrows is safe and quick elimination of enemy wards. Just shoot and forget.

Due to a small radius, low scaling and significant duration this ability is not the top priority for upgrading. It does not do a lot of damage and can be easily dodged so it’s good to keep it on level 1 until all the other abilities are maxed out.

Passive: Successive hits within 5 seconds on the same target deals an extra 3/5/7/9% Bow Shot Damage. This effect stacks up to 5 times, and is triggered by any damage Sparrow causes.

Since it totally depends on the amount of damage you do with your basic attack this ability is not the firts one you will want to upgrade and max out.

Every Bow Shot fires a triangle of 3 piercing arrows for the next 7 seconds. Side arrows deal Bonus Damage of Bow Shot damage (increases with each level of the ability).

Inner Fire is basically a “team wipe” button. It is very effective against grouped enemy and if not mitigated by any sort of Crowd Control or re-position can literally wipe an entire team. When maxed out it is nearly identical to making 3 shots instead of one. Less effective against a single target unless it is right in front of you and you are hitting it with all the three arrows. But being that close to your enemy is not what you would normally want to while playing Sparrow.

Windcarver Blade – a standard throw-away card in Sparrow’s deck for the early game. Should be equipped with minor Power upgrades.

Whirling Wand – the same thing as the card above. Boosts your attack speed a bit better.

Blink Charm – Sparrow does not have escape abilities at all. Here is one for her.

Sage’s Ward – a perfect ward for Sparrow with all the stats she needs and with those vital wards to mitigate lack of escape abilities.

Sword of the Altar – A good choice for Sparrow decks with Crit Bonus. It provides lifesteal as well

With this deck build nearly every hit you make will be critical. Sparrow will do less damage to structures (since you can’t crit structures) but your ultimate will be devastating. Some additional sustain is provided via Lifesteal and a Blink Charm Card. 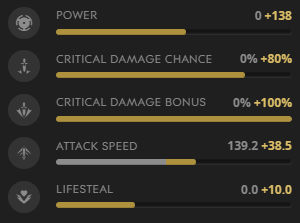 A well balanced deck for Sparrow featuring all the stats she needs except for blink. Will work well against enemies investing into Armor but requires strong map awareness provided by teammates. Especially because no ward is used. 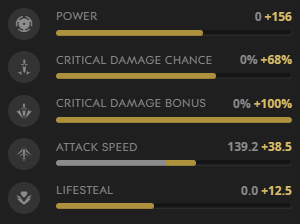 A very special Sparrow deck using a lot of utility cards. Main focus is of course on Power with some attack speed and Lifesteal. But there are four whole cards with special effects. Two of them are to mitigate one of Sparrow’s weaknesses – absence of escape. They are Blink Charm and Stasis Gem. Next this deck uses Hemorrhage to increase Sparrow’s burst damage and Satori Cloak for the same reason by shredding armor. 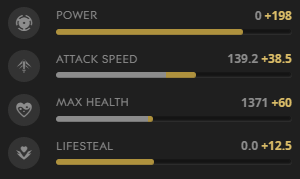 Sparrow has to use a super-safe opening. Unlike other carries she has no any peel options like Murdock‘s Move Anong or Grim‘s Displacement Blast neither she has escape abilities like Serath‘s Ascend or TwinbBlast‘s Rocket Dash. Wards are essential make sure either your support has one or you both have it. Pay attention to the River Buff spawns for the case enemy takes the purple one giving them invisibility.

Of course your main goal is to last hit and safely press the Tier 1 Enemy tower but again – safely. Good 1st abilities picks are Piercing Shot and Relentless.

When T1 tower is down you can consider rotations to the Middle Lane but only when your minion wave is set up appropriately and your T1 tower is safe. There is no sense in a rotation if it will cost you your own tower. Do not initiate team-fights and stay behind your tanky allies. Watch out for any incoming Stun or slow that can isolate you and make vulnerable to a focused fire.

Your job is to deal damage when team-fights start. From safe distance of course. In between the fights you may consider even using your ultimate to clean huge minion waves but it is an exceptional case.

Do all of the above what you did in the Mid Game. Consider some jungling preferably taking the Green Buff for an additional sustain. Use Hail of Arrows to zone enemies while in a team fight. As soon as you are sure an enemy is locked down by CC unleash your ultimate power and bring them down. Remember to be safe and watch the mini-map for opponents with CC that might be willing to back-stab you. Late game any team can provide an insane burst of damage which will be more than enough for one squishy Sparrow.

Tips and Tricks with Sparrow

Sparrow is exactly the hero who can benefit from Phase’s ultimate. With boosted attack sped Sparrow can stack Relentless extremely fast and deal devastating damage to a single target. Moreover her ultimate Inner Fire is all about making more shots over the ability duration. With Hyperflux it can become a reliable team-wipe tool.